Based on fund flows, indexing is the undisputed investment style of choice these days, and it has much to commend it.  Yet, as I have written before, it is not without its flaws, not least of which is its tendency to have at times heavy concentrations in hot companies and sectors that have recently performed very well.  Given that there are now faint echoes of 1999-2000 in today’s S&P 500 index (a good-sized weighting in tech stocks not least among them), I thought it would be worthwhile to revisit here Howard Mark’s April 2001 memo, in which he offers a post mortem of the last stages of the tech bubble and its subsequent popping, a comparison that I think yields useful lessons for today’s investors.  Marks writes:

“Thirty years or so ago, investors began to concede that while it was desirable to participate in the stock market, it wasn’t worth trying to beat it.  Under prodding from academics at the University of Chicago and practitioners such as John Bogle of Vanguard, there began a trend toward index funds, with their low costs and assured inability to underperform…

“With every period in which active managers underperformed, the trend toward indexing got another boost.  The percentage of equities held via index funds rose…But as the groups most heavily represented in the S&P did best, indexation was in fact looked at as an offensive weapon…

“By the end of 1999, technology stocks constituted roughly 40% of the S&P, and thus it no longer delivered ‘unbiased’ participation in equities…”

Of course, as Marks points out in his memo, – which is worth reading and re-reading in its entirety, – what propelled the S&P 500 and the index funds that tracked it to outperform in the late 1990s became its undoing with the collapse of technology stocks that began in March of 2000.  Today’s S&P 500 is more balanced today than it was in late 1999; technology stocks make up roughly 25% of the index, which is much less than the ~40% of the market tech stocks controlled then.  More importantly, technology’s representation is matched more or less by its earnings share, meaning that the weighting of tech stocks is far more reasonable if not justified than it was then.  Lastly, today’s S&P 500’s concentration among its top ten positions is about average with its history.

That being said, however, it is notable that even if the current S&P constitution is not as top-heavy as we imagine it to be, the current weighting of the top five S&P 500 stocks is now the highest it has been since the tech bubble, and of those five stocks, four are technology stocks (Apple, Alphabet, Facebook, and Microsoft), and the fifth, Amazon, is a tech stock in all but classification (chart via S&P): 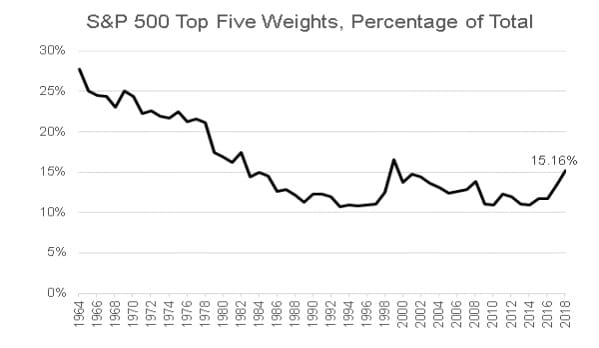 While I am a fan of index funds, I do think it is undeniable that, increasingly, index-only investors are once again making a large implicit bet on tech stocks, and a very large implicit bet on a handful of them.  I am not suggesting, by the way, that actively managed funds would do any better, as almost all the evidence suggests they would not.  I am suggesting, however, that index-only investors understand these implicit bets, and determine if they are still consistent with their investment goals and risk tolerance, especially if their portfolios have grown out of balance with the recent surge in the stock market.