In the midst of a prolonged bull market, investors have been waiting for a long time for the bear market’s return.  While it is certain that the bull market will end at some point, it is obviously unclear what shape the bear market will take.   As I have written before, each bear market is unique in its own way, with some being very protracted inflationary or deflationary cycles, such as the 1970s or 1930s, and some being quick and relatively short-lived, such as the crash of 1987.

Give that global markets are now more connected than ever before, and market composition has changed dramatically in favor of certain sectors like technology, it may be somewhat instructive to examine the two most recent bear markets to get a sense for what may be in store for investors whenever the current bull cycle ends.  To that end, it is worth noting that the 2000-2002 and 2007-2009 bear markets, – both of which coincided with recessions, – were very different when broken down by sector.  The 2000-2002 bear market was very uneven, with consumer staples actually gaining handsomely, and other sectors such as energy and healthcare suffering modest losses.  In contrast, the 2007-2009 bear market was felt in every sector, with no sector suffering losses less than 30 % (data from S&P): 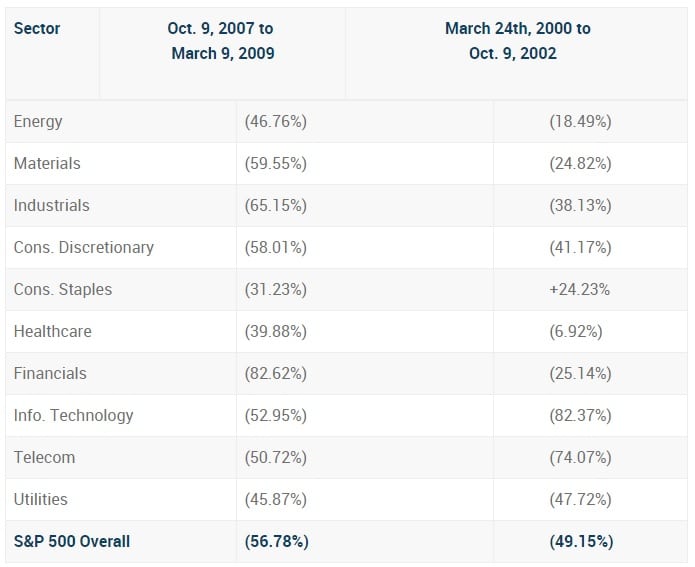 It is interesting to note that each of the last two bear cycles began with huge allocations within the S&P 500 to two sectors (financials in 2007), and information technology (2000), each of which plummeted more than 80% in their respective bear markets before bottoming out.  Four sectors, – energy, healthcare, consumer staples, and utilities, – managed to increase “market share,” if you will, during each of the last two bear markets, which is remarkable only to the extent that it might demonstrate how out of balance the indices had become prior to each subsequent bear market:

As far as foreign markets are concerned, investments outside the U.S. provided little cover during the 2000-2002 downturn, with the MSCI World ex-USA and the MSCI EM indices each declining about 45%.  In the case of emerging markets, this decline was despite trading at roughly a 30% discount to the S&P 500’s multiple at its 2000 peak, something that should give pause to investors who think that (current) relative value alone will provide shelter in the coming market storm (chart from WisdomTree): 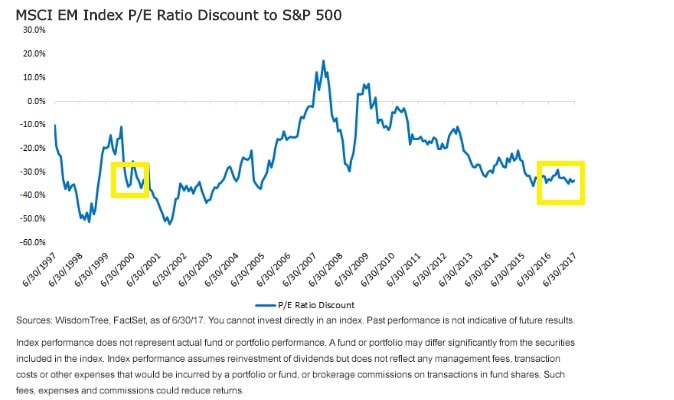 During the 2007-2009 bear cycle, both the World ex-USA and EM indices declined about 60% as the bear market left no corners of the globe untouched.  In retrospect, this should not have been surprising given that correlation among global equity markets had been on the rise for years.  It is worth mentioning that while current correlations are roughly twice what they were twenty years ago, they are currently far below the recent peak, which may indicate somewhat different results for U.S. and foreign equity markets whenever the bear market arrives (chart via JP Morgan): 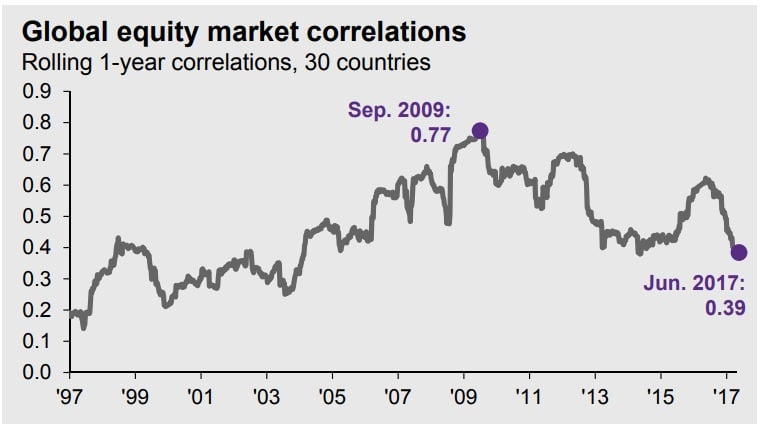 Going forward, the dilemma for asset allocators is the same as it always has been:  identifying the risks most likely to pose a threat to their portfolios, and positioning accordingly.  Without knowing beforehand the nature of the coming bear market, the temptation might be to diversify so thoroughly that every conceivable risk is addressed.  This would be folly, however, as precious capital would be dispersed so widely that no successes could be exploited, and no grave threats seriously parried.

The obvious place to start would be the portfolio’s equity allocation.  Given the evidence, it seems reasonable to conclude that despite whatever the nature and cause of the new bear market turn out to be, most global equity markets will suffer as they did 2007-2009, with the only question being to what extent and duration.  Investors should prepare accordingly by ensuring they have only as much equity exposure as their financial goals require, while maintaining sufficient sums of shorter-duration instruments such as cash and bonds.  Given extremely low current yields on cash and bonds, it is doubtful that they will perform as well as they have during past bear markets, but their utility should be assessed more on the basis of retention of value than an increase in it.

Non-core positions such as gold or inverse-ETFs that effectively short the market may provide a boost, but to have an effect, one would have to allocate substantial sums to realize their full potential, and holding onto these mostly counter-productive assets for long periods while anticipating the bear market seems to guarantee disappointing results in the interim.  Alternatively, strategies such as trend-following might prove useful for investors with easy access to their implementation.

Other than sufficient diversification, the simplest solution for weathering the coming storm is behavioral, and that is for investors to save more, thereby reducing the impact of a bear market, whatever its ferocity, on their portfolios.  This is easier said than done, especially in a rising market when net worth seems to grow monthly as if by magic.  Yet, in the long run, it will prove to be the most effective insurance against portfolio losses of any depth or duration.