“If the Romans had been better acquainted with the laws of hydraulics, they would not have constructed all the aqueducts that surround the ruins of their cities; they would have made a better use of their power and wealth.  If they had invented the steam-engine,  perhaps they would not have extended to the extremities of the empire those long artificial ways which are called Roman roads.  These things are the splendid memorials at the same time of their ignorance and of their greatness.”

The passage above is among my favorite from de Tocqueville who, in my estimation, ranks among the four or five greatest writers of modern Western Civilization.  It is both laudatory and damning, and, like everything else he wrote, it is perspicacious and wise.  It applies very well to fads in the investment world.

In finance, we allocate investment capital based on the industries and technologies we know today, and, generally, we extrapolate what has happened in the recent past far into the future.  However, in a capitalist society, technology disrupts the status quo, and the ‘creative destruction’ of innovation oftentimes leaves investors bruised.  This passage from Credit Suisse on the “Rise and Fall of Industries” sums it up well:

With the Industrial Revolution came the requirement for modern and more efficient transport.  Manufacturers ditched the usual horse-drawn carriages and wagons, and jumped on canal boats, as they were sixty times more efficient (measured in ton miles per day).  Investors went mad for canal companies and, in 1792, the London Stock Exchange saw a canal frenzy, followed by a crash the next year.  It did not destroy the new industry though and, what’s more, between 1816 and 1824 canal stock prices rose by 140 percent.

However, this marked the end of the canal boom, as a faster and more efficient mode of transportation was introduced — railways.  The new era began and, over 25 years after the railway’s debut, the canal stocks fell by 70 percent.  Although railway mania hit the world, it was a rocky ride for investors. The stock exchange witnessed the same investor behavior and the same ups and downs as when the canal stocks were introduced.

By 1900, rails dominated the stock markets of Great Britain and the United States (from Credit Suisse): 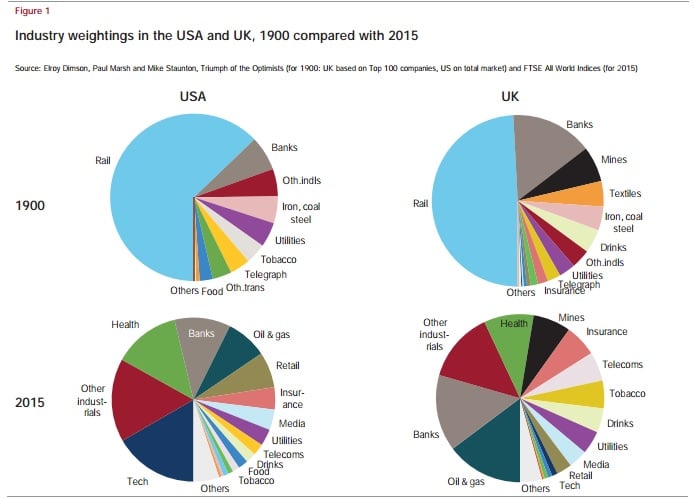 Who among stock brokers and investment analysts in 1900 could have foreseen the eclipse of railroads?  However, just like de Tocqueville said about the Roman aqueducts and roads, the miles of unused railroad tracks today are monuments (albeit not as conspicuous) not just to a young nation’s will to master a continent, but also to the 19th century’s ignorance of internal combustion and air travel.  Today, mileage of track currently being operated is about 32% of its 1930 peak.  Not too long after that peak, many railroad companies suffered bankruptcy.  The same cycle of disruption, over-investment, and more disruption repeated itself in the early 1900s in automobiles, and in telecommunications and internet companies most recently. Investors made, – and lost, – fortunes in all these instances.

Alasdair Nairn, in the book “Engines that Move Markets”, concludes that most innovations are greeted by markets with skepticism and rejection, followed by over-enthusiasm leading to stock market “bubbles”.  Only after investors’ emotions cool down comes the phase of rational assessment and stocks being valued correctly.  However, the biggest beneficiaries of new technologies are usually not new stock market investors, but the innovators, founders and societies as a whole [my emphasis].”

One potential takeaway for investors in this:  investment in industries less subject to technological disruption has seemingly been a winning strategy, as witnessed by the outperformance of the food and tobacco industries over the market in general, and capital-intensive, easily disrupted industries such as shipbuilding and steel in particular (again, from Credit Suisse): 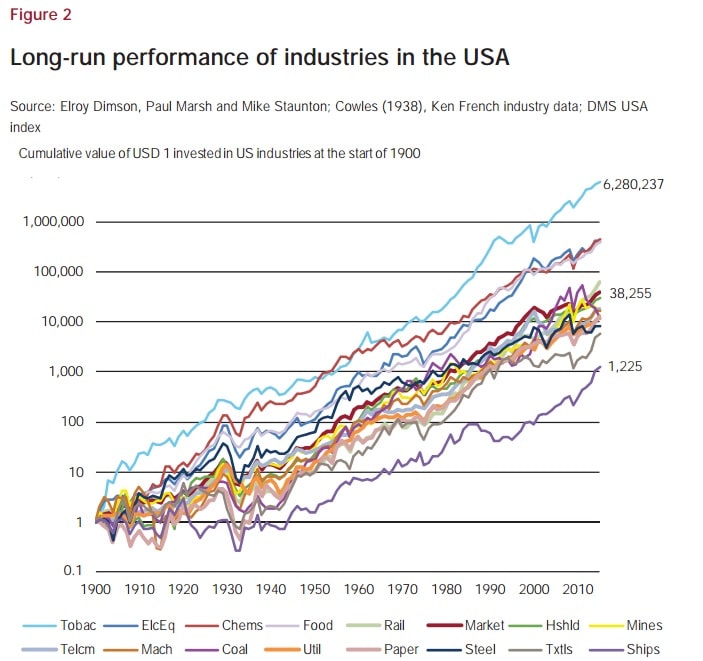