Warren Buffett’s performance as an investor has been extraordinary, and there is no doubt his savvy and skill are unmatched.  One need only look at the wealth he has created for his shareholders to see this; from 1965 through May of this year, $1 invested in Warren Buffett’s Berkshire Hathaway would be worth an astounding $14,975, while investors in the S&P 500 over the same period would have seen their $1 grow “only” to $144:

The last two decades for Berkshire Hathaway shareholders, however, have been somewhat less stellar, with the S&P 500 narrowing the performance gap considerably since the late 1990s: 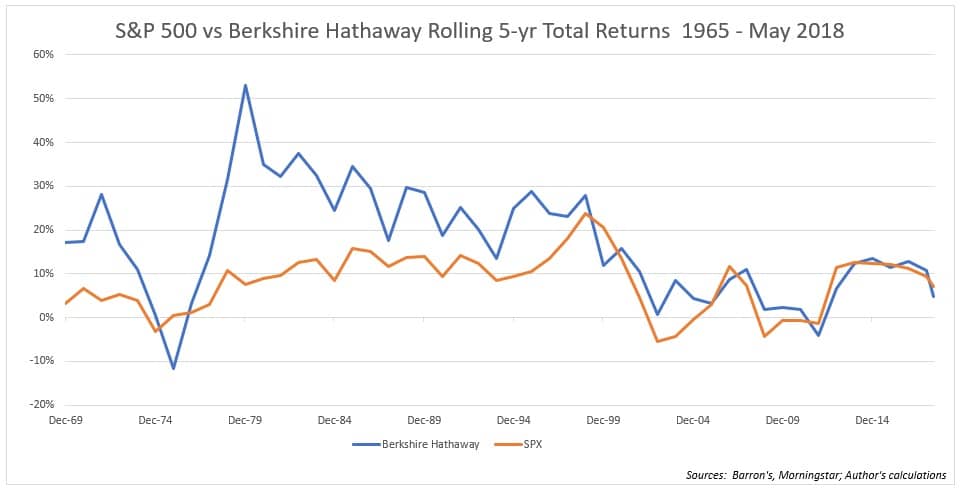 There have been numerous attempts at explaining away this somewhat lackluster performance by Berkshire Hathaway, with some focusing on Buffett’s failure to identify early on the huge potential of “new economy” stocks like Amazon, Netflix, and others.  Other analyses look at the sheer size of Berkshire Hathaway’s assets and chalk up the lower performance to the inevitability of diminishing returns.  Finally, some consider that the overall poor performance of value stocks, – a favorite of Mr. Buffett’s, – may explain Berkshire’s relative doldrums.

It is quite possible that all of these explanations are valid, but any analysis should begin with considering what made Mr. Buffett so successful in the first place.  AQR has done this for us, thankfully, identifying Mr. Buffett’s formula for investment success as a focus on “cheap, safe, [and] quality stocks,” combined with the use of leverage to amplify returns.  Essentially, Mr. Buffett has made a fortune by investing in value stocks (cheap), that are highly profitable (quality), and with a lower degree of volatility (safe).

If those key factors have been Mr. Buffett’s focus throughout his career, and if Berkshire Hathaway’s returns have been (by his standards) subpar these last few years, a reasonable conclusion could be that those factors simply do not reward shareholders the way they once did.  By isolating these factors, however, we can see that the data are actually mixed:

Interestingly, the S&P 500 Low Volatility portfolio, which focuses on the 100 least volatile stocks in the S&P 500, and which I have used here as a proxy for “safe” stocks, has actually outperformed Berkshire over each period, and has fallen short of the S&P 500 over just the most recent five-year period.  The S&P 500 Value index, which is admittedly a poor substitute for value, has indeed lagged both Berkshire and the S&P 500, so value’s fall from grace could offer a partial explanation.  Finally, consumer staples stocks, which I use here as a proxy for quality stocks, have had mixed results, but they have performed well enough over every period save the last five years for me to think their contribution to Berkshire’s weakening performance has been somewhat small.

I am tempted, however, to offer another explanation, for Berkshire’s diminished excess performance.  If instead of comparing Berkshire Hathaway to the market capitalization-weighted S&P 500 we compare it to the equal-weighted version of the index, as well as to the equal-weighted version of the S&P 500 sector indices, we can see that Berkshire’s performance over the last two decades has arguably been much weaker than one would have expected [Note – red indicates Berkshire underperformance; green indicates Berkshire outperformance]: 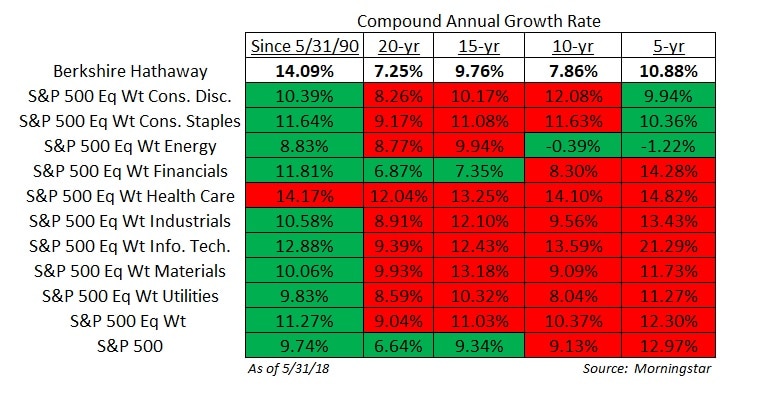 As the table indicates, Berkshire crushed just about everything in the early and mid 1990s.  However, over the last twenty years, even while it has outperformed the S&P 500, Berkshire has failed to surpass even the equal-weighted portfolios (which give you the most exposure to the average stock in each index or sector) in even the mundane sectors like utilities and materials.  To me, this gives lie to the notion that Berkshire has performed somewhat poorly because it failed to invest early on in popular growth stocks.  What is more likely is that Mr. Buffett’s Berkshire became a victim of its own success by becoming too richly valued in the late 1990s.  Given that Berkshire’s price-to-book ratio exploded to more than 2.5 circa 1998, this seems more than plausible, as of course subsequent returns are to a large extent determined by starting valuations (chart via Bloomberg):

Additionally, rather than providing evidence that value investing is “dead,” the fact that Berkshire has underperformed so many various S&P 500 equal-weighted portfolios actually makes the case that value investing still works, given that equal-weighting gives investors more exposure to the value factor.  Furthermore, the sectors with typically the highest degree of quality stocks, – industrials, consumer staples, and healthcare, for example, – generally delivered  market-beating returns over most of the last twenty years, which to me suggests that quality as a factor is alive and well.

What I think can safely be concluded from this analysis, then, is that while the formula that AQR identified as “Buffett’s Alpha” is still useful in determining what are attractive investments, not even Mr. Buffett himself can overcome such a high hurdle as an extremely high valuation when it comes to delivering subsequent excess returns.  This is a powerful lesson that investors today are remiss if they choose to ignore it.