I recently posted to Twitter that the energy sector is currently in the midst of the worst continuous period of underperformance (eighty-two months and counting) relative to the S&P 500 since 1990:  worse than tech stocks post-2000, and worse than financial stocks in the aftermath of the financial crisis: 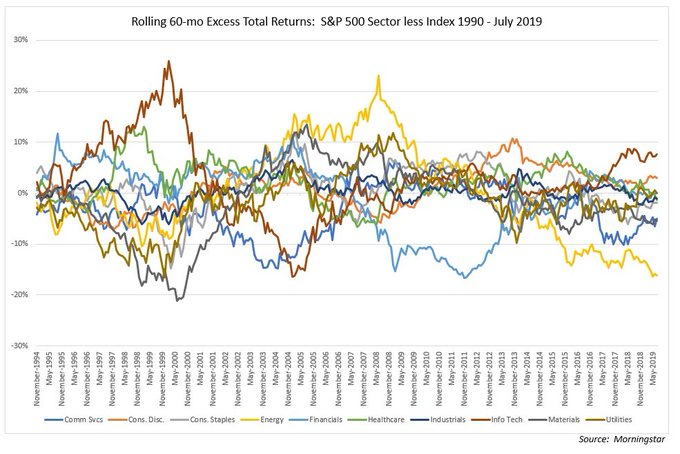 Going back further, oil stocks have not fared this poorly versus the broad market at any previous time in the past fifty years:

As though these charts were not indication enough of the pain being felt by energy investors, it is worth noting that the energy sector recently suffered its first negative ten-year return since the Depression: 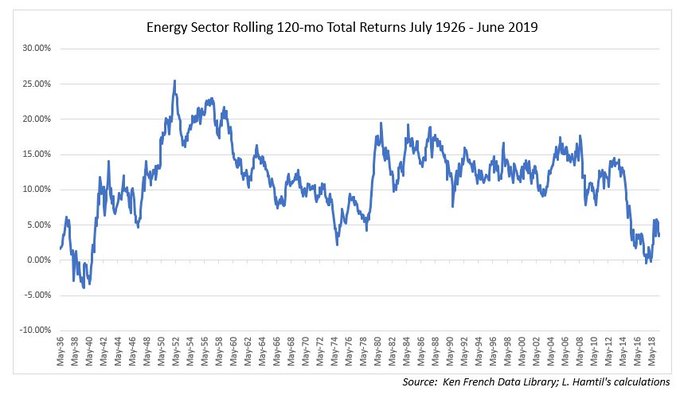 The logical question being asked by many, then, is whether energy stocks are worth holding at all.  The combination of oil’s persistently low price relative to more recent history along with worries over climate change has led to momentum building behind the argument that energy stocks should be divested not just by conscientious investors, but also by any prudent investors.

I, however, think that would be a mistake.  As I articulated a few years ago in a column I wrote for Barron’s, energy stocks have been one of the few domestic sectors that are largely uncorrelated with other components of the broader market, particularly those that are in vogue today, such as technology.  Energy stocks have also offered investors inverse correlation with the dollar, bolstering portfolios when the greenback has been week.  Additionally, they have proven to be reliable inflation hedges.  Here below is a bit of an expansion on that original argument.

Regarding correlation, this matrix shows that energy stocks have been most highly correlated with materials stocks and industrials, while being considerably less correlated with the largest sector in the market today, information technology:

Another way to express this relationship is to chart the excess returns of technology stocks versus energy stocks against changes in the value of the dollar.  By doing so, the quite different relationship each sector has with the dollar is evident: 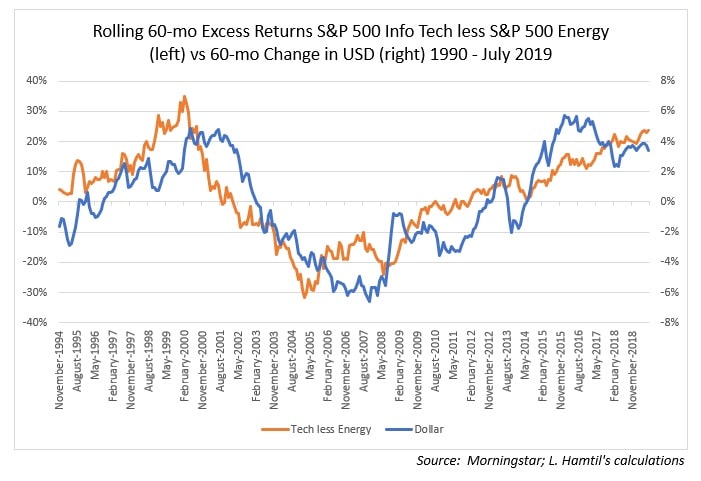 This relationship makes sense; after all, energy stocks track oil, and oil generally rises when the dollar is weak, as it was in the 1970s and 2000s.  I am less certain about why technology should benefit from a strong dollar, but I would venture to guess that because it thrives off new investment, a strong dollar makes investment in commodity-type operations less appealing, while making new technology investments more appealing at the margin.

Regarding energy stocks’ ability to guard against inflation, I would encourage anyone interested to read my recent article on inflation and value stocks, which touches on the topic, and which would be redundant to repeat here.

Skeptical readers will be tempted to note that all of these examples are backward-looking.  What about the future?  Are oil and gas stocks doomed in a future fueled by renewable energies?

Not necessarily.  J.P. Morgan recently published an in-depth look at the future of energy, and discussed just how big of a dent renewables are projected to make in fossil fuel consumption.  The short answer is that the impact should not be that great, at least over the next couple decades, with petroleum’s share of energy consumption projected to remain more or less constant, and natural gas’s share rising (chart from JPM):

Aside from the fact that renewables are not yet in a position to supplant meaningfully fossil fuel consumption is the harsh reality that renewables introduce nasty side-effects all their own.  As Mark Mills recently wrote in the Wall Street Journal, “A single electric car battery weighs about 1,000 pounds.  Fabricating one requires digging up, moving and processing more than 500,000 pounds of raw materials somewhere on the planet…Building one wind turbine requires 900 tons of steel, 2,500 tons of concrete, and 45 tons of nonrecyclable plastic.”  The economics of renewables are simply not currently competitive with those of fossil fuel technologies.

This unfortunate reality is largely reflected in the performance of renewable energy companies.  In fact, performance has been so dreadful as to make oil and gas stocks look positively tech-like over the last decade or so: 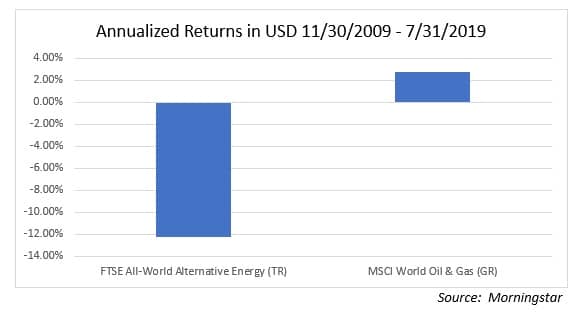 In sum, I think it might be safe to say that the future may not look so different from today.  It is easier for this observer to imagine a future with cleaner and more efficient production and use of fossil fuels than it is to imagine a wholesale replacement of them with renewable energy.  Accordingly, it is my belief that oil and gas companies should remain a staple of properly diversified portfolios, and should benefit those who continue to hold them the cycle turns, and the dollar weakens, and inflation returns.