Since the financial crisis, the U.S. stock market has outperformed the rest of the world by a fairly wide margin, with the current ten-year return differential between the MSCI USA and MSCI World indices standing at about 3% annualized (via MSCI):

Given such a disparity in returns, it has been tempting to argue that a globally diversified portfolio is not truly necessary.  After all, as I have noted elsewhere, the U.S. stock market is rivaled among other countries only by Japan in terms of its diversification, and unrivaled by any in terms of its dynamism.

However, to draw such a conclusion after only one decade of performance would be premature; after all, there have been previous cycles where the rest of the world outperformed the U.S. by similarly wide margins.  To get a better grasp of whether the globally diversified portfolio added risk-adjusted value over the US-only portfolio, I ran the numbers back to February of 1986, which was the furthest back available data went.  Given a greater max drawdown and lower Sharpe ratio (which measures risk-adjusted returns), it is hard to argue that a global portfolio offered any value to American investors at all.  If anything, the U.S. market provided diversification to the rest of the world, which is the reverse of what investors are usually told when urged to invest globally:

Granted, February of 1986 is perhaps not the best starting point for a global portfolio as Japan was in the last stages of an unprecedented bubble that catapulted Japan to the highest weighting in the MSCI World Index, and Japan’s bubble would burst just a few short years later.  Changing the start dates, however, might certainly change the results, but that would also reek of arbitrariness.

Instead, I opted to run rolling 3-year excess Sharpe ratios to identify when the global portfolio would have yielded superior risk-adjusted results: 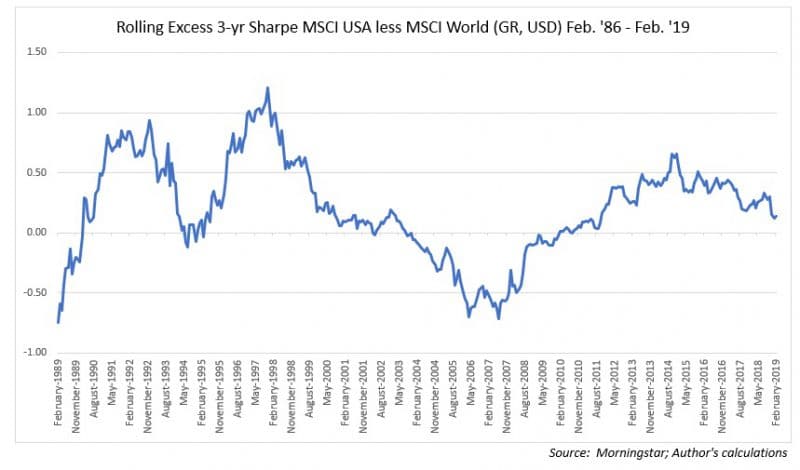 It can be seen quite readily that the last decade is hardly an anomaly as far as U.S. outperformance is concerned; aside from the immediate aftermath of the tech bubble and the ensuing commodity & financial bubble, the U.S. has generally enjoyed superior risk-adjusted returns to the global portfolio.

To be fair, currency has quite a bit to do with this, as I have mentioned here, here, and here.  So, how much did currency impact relative risk-adjusted returns?  Indeed, currency had a material impact over the last three decades: 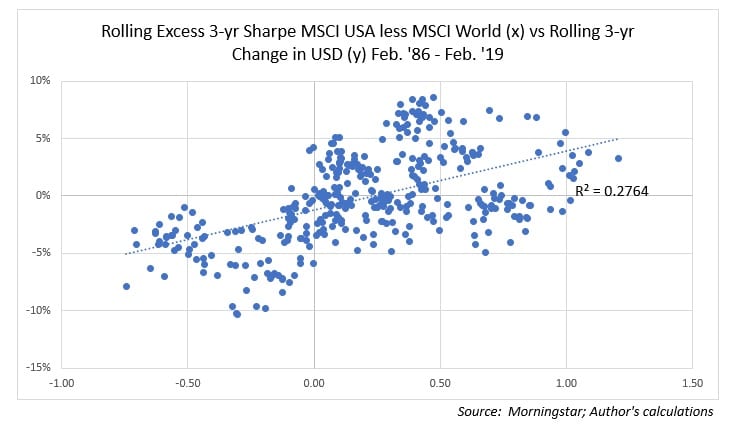 Perhaps, then, the fairest comparison is the U.S.-only compared to a currency-hedged global portfolio?  To determine this, I created a 50-50 split index composed of the MSCI USA and MSCI EAFE 100% Hedged index, which was rebalanced annually to the 50-50 mix [unlike the portfolios tested above, this is based on net returns, which were all the data available.]  Since 1993, the earliest common start date, the simulated hedged global portfolio exhibited less overall volatility as well as a slightly more modest max drawdown, but still posted a lower Sharpe ratio:

It seems that no matter how one looks at the data, the last few decades have not been friendly to the global equity portfolio when viewed through the lens of an American equity investor.  However, I do not want readers to come away thinking that I am opposed to investing abroad.  Far from it!  As I have argued previously, there is no compelling reason to own everything in the foreign equity universe.  Similarly, foreign equity portfolios with factor tilts such as momentum and minimum volatility offer value to investors.  In addition, investors may find better value in foreign small caps as I have discussed here and here.  So, by all means, diversify your portfolio not just sufficiently, but also prudently.