Last February, I detailed the case for a barbell strategy of 50% low volatility and 50% momentum.  For the article, I used data for the S&P 500 Low Volatility and S&P 500 Momentum indices as they were what were available at the time.  Given that there are several differences in methodology between S&P and MSCI in terms of index construction (for example, MSCI’s Minimum Volatility index takes a more sector-neutral approach, whereas S&P’s Low Volatility index does not), I received several questions about whether the “barbell” idea worked as well using the MSCI indices, or whether it was perhaps a product of implicit sector bets that bore fruit mainly in the aftermath of the tech bubble crash.

Before I go further, I should mention that the common start date for the comparable indices is September 16th, 1994, so analysis starts on that day.  It should also be noted that for the MSCI indices, I used the net return series, for those had the longest track record.  It is probable that the gross return series would have yielded slightly more positive results.

That being said, it can be seen that the comparable indices, whether individually or in the “barbell” pairing, surpassed the return of the S&P 500 both in absolute and in risk-adjusted (e.g. a higher Sharpe ratio) terms:

However, the differences in both absolute and risk-adjusted returns between the MSCI and S&P “barbells” is intriguing.  Can it be largely be due to differences in index construction?  Looking at drawdowns, that appears to be the case, at least for the full time period, which includes the tech bubble crash.  For example, looking at the differences in drawdowns, it can be seen that in the aftermath of the tech bubble collapse, the sector-neutral MSCI Minimum Volatility index declined more than its S&P counterpart, while the reverse is true for the respective momentum indices: 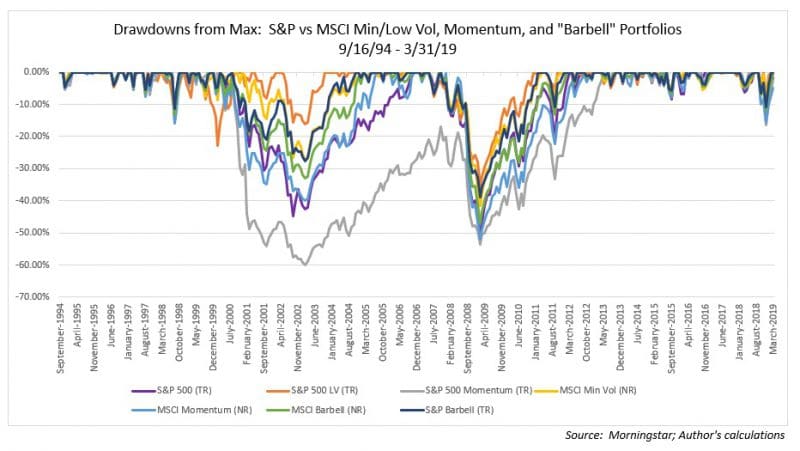 In other words, for MSCI, sector neutrality was a blessing in momentum, but a burden in minimum volatility, while the reverse was true for the S&P indices.

This is perhaps best seen when comparing the excess returns of the two “barbell” strategies over time.  Doing so reveals that the S&P “barbell” benefited most in the aftermath of the tech collapse, whereas the more sector-neutral MSCI “barbell” generally had less “tracking error,” meaning it experienced smaller swings in either positive or negative excess performance: 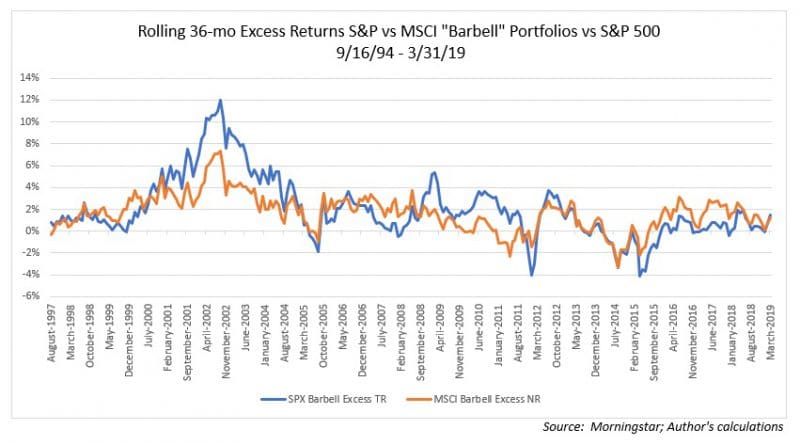 This underlines the importance of understanding the implicit bets you are taking when you invest in these factor-type portfolios.  If you looked at data going back to 1994, you might think the S&P strategy was the better option.  However, more recent history suggests that may not necessarily be the case.  The market has not experienced such extremes as existed prior to and shortly after the tech collapse of 1999-2000, and in a strong bull market such as what we have witnessed over the last decade, a sector-neutral stance would have yielded superior results.  In fact, over the last ten years through March, the MSCI “barbell” surpassed both S&P “barbell” in terms of performance, while the S&P “barbell” failed to surpass the market’s return: 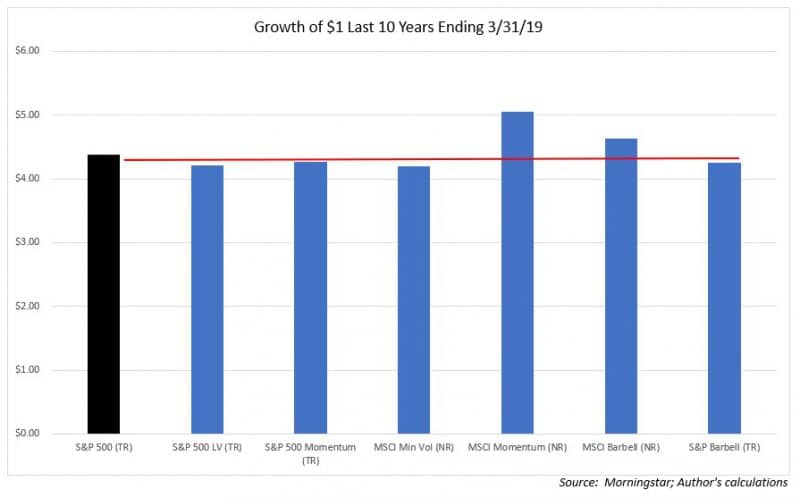 So, in sum, the Low / Minimum Volatility – Momentum Barbell seems to be a winning strategy depending on how it is implemented.  However, there is no way, of course, to determine which will be the best instruments for implementation, but it is important always to look beyond superficial portfolio metrics and understand what it is exactly you are investing in when you adopt a given factor strategy, and, I would add, that when there are no clear extremes present in the market, sector-neutral may be the superior option.