Last summer, I wrote an article about lasting moats, describing certain industries that I think are characterized by durable moats that insulate the incumbents against not just competition, but also against major technological disruption.  Along with the tobacco, railroad, and airport industries I would like to add oil and gas refining.

Oil and gas refining might seem like a strange choice, given enthusiasm surrounding alternative energy sources such as wind and solar, but, realistically, there seems no end in sight to the world’s reliance on oil and gas for its transportation needs.  On the supply side of the equation, sources of alternative energy seem incapable of fully replacing fossil fuels, and on the demand side, electric vehicles have not progressed much in terms of economic viability since 1900, when, according to historian Alasdair Nairn’s brilliant book, Engines That Move Markets, electric cars actually outnumbered gasoline powered cars.  Nairn writes:

‘Like the steamer, the electric vehicle provided no great cost advantage over the gasoline engine.  Indeed there are estimates that it was 20-50% more expensive to purchase and two to three times more expensive to run.  If this was not a sufficient barrier, it also suffered from a limited range, speed, and traction…”

So, it seems safe to say that, for now, fossil fuels are not in danger of being replaced by disruptive alternatives.  Refining companies are well-positioned to benefit from this reality as, like railroads and airports, they benefit from the energy market’s geographic strictures, which means that a good deal of refining capacity will be clustered in areas like the Gulf Coast, which is easily accessed by tankers (graphic via the EIA): 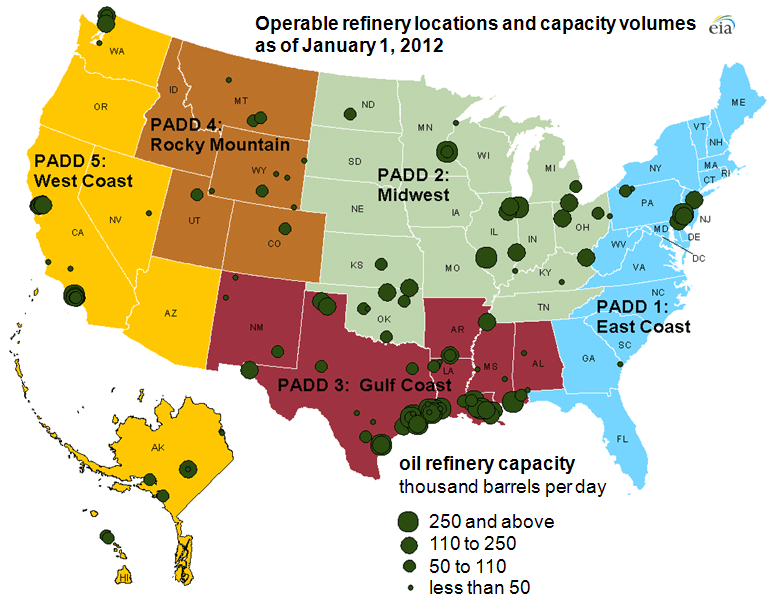 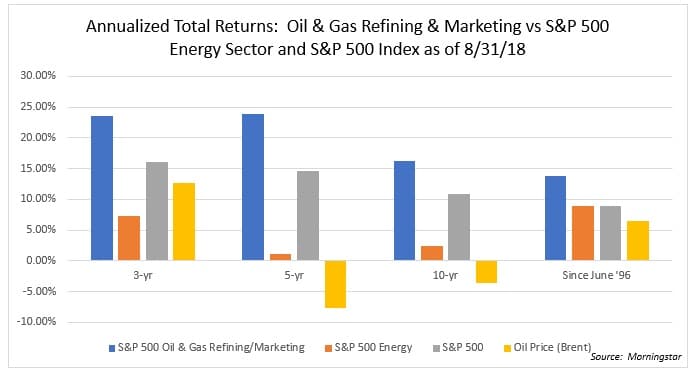 Fossil fuels are a controversial topic given the worries over climate change, but I am on the record as saying fossil-fuel related investments are still a crucial part of a properly diversified portfolio.  While it goes without saying that past performance is not indicative of what investors can expect going forward, it seems to me that the advantages enjoyed by the oil & gas refining industry are not likely to be diminished in the foreseeable future, and the industry remains compelling from a fundamental long-term perspective.