Over the last few years, I have highlighted a few flaws which I see in index-only investing (see here, here, and here).  Chief among those flaws, as I see it, is that the index tends to overweight expensive sectors and companies at the expense of cheaper ones, thus inhibiting somewhat the performance of the portfolio.

Given that information technology has now come to constitute what I think is a bit alarming 25.6% of the S&P 500, – the highest weighting for any sector since 1999, and up from ~20% as recently as 2016, – I wanted to see if history could yield any clues as to what index-only investors could expect given that more than one-fourth of the domestic equity index is now a rather large bet on technology shares.

Using calendar year data (e.g. 12/31/1990 – 12/31/1995), I ran the subsequent five-year returns for each S&P 500 sector for every year from 1990 to 2013.  Not surprisingly, from 1990 to 2011, no top-weighted sector was the best performing sector over any subsequent five calendar year period.  Equally as unsurprising is that in all but four instances, the top performing sector began the five year period heavily underweighted within in the index.  However, the last few years have been startlingly different, with technology stocks being both the top weighted sector and top performers over the five calendar year periods beginning in both 2012 and 2013: 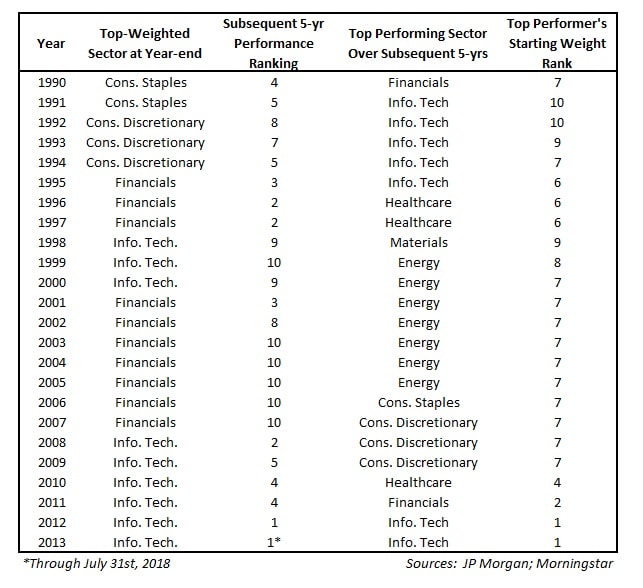 To some extent, this exercise can be considered just another way of illustrating that value generally beats growth, and also that the last few years have been very frustrating to value investors.  It seems to this observer, however, that the capitalization-weighted index is getting increasingly concentrated in terms of both individual companies (Amazon, Google, and Apple are each weighted more heavily than several entire sectors), and sectors (the top three sectors make up more than 54% of the index, the highest since the tech bubble peak of March 24th, 2000, I believe).  Investors should consider whether the next few years will beat the odds and more closely resemble the last few years, or follow the pattern established over a much longer history with a reversion to the mean.