Tom Russo’s investment commentaries have long been a favorite of mine, not simply because of his very impressive performance (which includes outperforming the S&P 500 by roughly 3% annually from 1990 through 2016), but because of how he has accomplished this remarkable feat.  Unlike Warren Buffett, who was one of his early mentors, Russo embraced the larger opportunity set provided by the global equity market, and invested abroad at the beginning of his career.  This makes Russo’s outperformance all the more remarkable; as I have written previously, the last few decades have not been kind to a globally diversified portfolio.

A self-styled ‘value investor,’ Russo has approached the international markets in a much different manner from how conventional value investors have done it in the sense that he has not scoured the earth for the cheapest available assets; instead, Russo has preferred to look for reasonably priced investments with tremendous capacity to reinvest and maximize the opportunities of a globalized world.

Perhaps the best example of Russo’s philosophy is Nestle, which was for many years his largest holding, and which still composes a large percentage of his current portfolio.  A few years ago, Russo explained in detail why he preferred Nestle to a company like Kraft, which focused primarily on the domestic American market:

I own Nestle rather than Kraft, for example, because Nestle historically planted seeds for its brands in hundreds of countries that now can absorb immense amounts of capital spending to build infrastructure and to invest in marketing to activate those brands.  Kraft, with its much more U.S.-centric past, does not have the same capacity for reinvestment.  I want our money to work for us – in essence, I am passing through to our portfolio company management much of my obligation to reinvest.

Similarly, Russo passed on Hershey in favor of Nestle due to the former’s decision, in Russo’s words, to “go home” after World War II, and enjoy the benefits of a rich domestic market rather than be patient and take advantage of the name recognition Hershey had enjoyed during and after the war in Europe and Asia, courtesy of American troops who shared their Hershey rations with the local populace.

Of course, in 1945, America was rich, and the rest of the world was more or less rebuilding, so Hershey’s decision to focus on the U.S. market seems, in retrospect, reasonable, and not necessarily shortsighted.  However, based in tiny Switzerland, Nestle had no such luxury, with the extremely limited potential of a very small, albeit rich, population.  As Russo explains:

Think by contrast of Nestle, where they had about one-and-a-half percent of their employees living in Switzerland and something like less than one percent of their revenues are Swiss-generated.  Their whole existence, their very essence, is build around non-domestic activities.

Although both Hershey and Nestle have been fine investments over the last quarter-century, Nestle has been the better performer over the period, validating Russo’s confidence in the more globalized focus of the Swiss multinational: 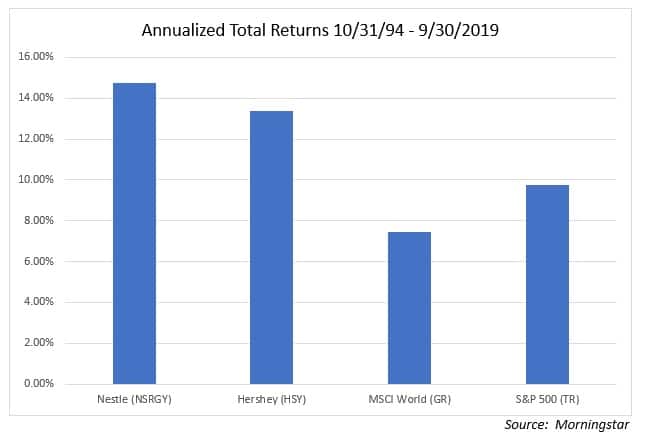 In addition to looking for opportunities abroad where the mindset is to maximize the potential of a globalized world, the other critical factor in the success of Russo’s global portfolio has been the tailwind provided by foreign currency appreciation against the dollar.  For Russo, diversification away from potential dollar devaluation is a key reason to invest abroad:

My own perspective as to why I thought it was important to have a portion of my investors’ funds abroad was, on one level, quite specific.  Having studied at law school and having sort of recognized the way politics work, I just feel –then did and still do–that over time, Americans will devalue their currency.  The process of democracy being permitted to promise more to their voters to get votes than they can deliver is a dangerous system.

This built-in hedge against USD weakness has benefited the performance of Russo’s global portfolio over time; in 2012, he estimated that it had provided something like one half of one percent in terms of additional performance over the previous twenty years.

Of course, it is necessary to note that Russo has been shrewd with his currency bets, as evidenced by his longstanding large bet on Nestle and its implicit bet on the Swiss franc.  As Credit Suisse noted in the 2019 version of their annual Global Investment Returns Yearbook, the Swiss franc has appreciated against the U.S. dollar by roughly .7% per year since 1900.  This strong currency performance provided by the Swiss franc has certainly aided dollar-based investors like Russo and other American shareholders of Nestle as the un-hedged Swiss equity index, as measured by MSCI, has outperformed its fully hedged counterpart by more than 1% annually since 2000: 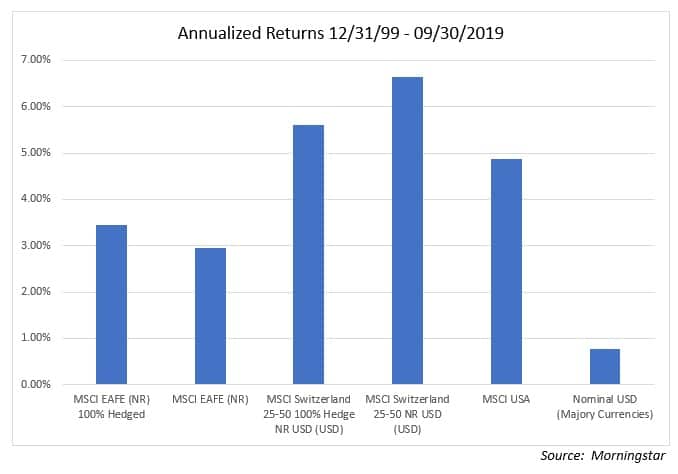 Crucially, the dollar was only slightly positive over this period, but hedging against USD strength would have added .50% per year to the performance of a generic foreign equity index like the EAFE.  Said differently, if you are interested in owning foreign stocks denominated in local currency as a hedge against USD weakness, then it is necessary to be selective in terms of these bets as it is possible, if not even likely, that many foreign currencies, beset with similar fiscal issues as the United States, will depreciate in value more rapidly than the U.S. dollar.

In my opinion, any investor looking to invest abroad should heed these lessons from Tom Russo.  I am a well-known skeptic of most approaches to international equity investing, but the experience of Tom Russo’s investments results confirm that there are indeed very attractive investment opportunities abroad, provided one is selective in terms of how those companies are managed in addition to being aware of the potential headwind or tailwind provided by foreign currency.